Our Take on Security Versus Utility Tokens

Here at FrontFundr, we talk to a lot of companies determined to issue utility tokens. Unfortunately (and often after enduring high legal bills to structure the potential utility token offering) most of those companies realize it's nearly impossible. Read on to find out why: 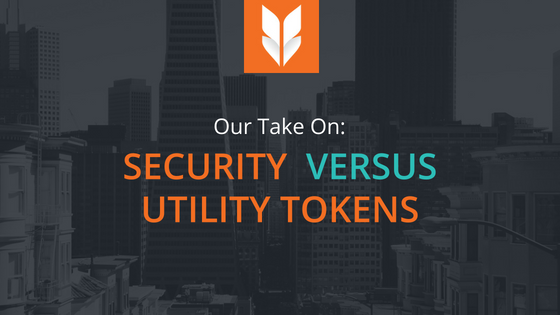 Let's start with some definitions

The term “utility token” refers to a token that has one or more specific functions, such as allowing its holder to access products or services based on blockchain technology.

According to the most recent communication by the Canadian Securities Administrators (CSA), "security tokens" constitute an investment contract, where the main use-case, and the reason for contributors to buy the tokens, is the anticipation of future profits in the form of dividends, revenue share, or (most commonly) price appreciation.

Why are utility tokens so enticing?

Utility tokens are more attractive to a lot of companies, because of the significant trading restrictions on securities. If an Initial Coin Offering (ICO) is classified as a security, the organization will normally face stringent regulations and limitations on who can invest and how tokens can be exchanged.

The recent CSA communication explains that the offering of tokens involves the distribution of securities, when:

Even if an issuer intends for their token to be utilized, the truth may be that most of their buyers are holding tokens as an investment. While there are utility tokens that are successfully structured to have no investment characteristics, these are actually quite rare.

This is because regulators go by the philosophy of “substance over form”, meaning the commission looks at tokens according to the way they are actually used rather than the way they were intended to be used. This philosophy leads to many intended utility tokens being classified as securities, because the economic reality is that the contributors are motivated by the anticipation of return.

An example of a utility token being subsequently deemed a security is The DAO. The DAO aimed to fund decentralized projects by issuing tokens. The developers wrote code and issued tokens with the intention that the people who bought tokens would receive whatever profits were made from the projects they funded.  They were under the belief that they structured their offering as a utility token.

The SEC didn't agree with The DAO's classification, releasing a report in which it asserted for the first time, that the sale of a distributed ledger token constituted an illegal sale of unregistered securities. Although the team behind The DAO likely did their best to structure the token as a “utility token”, regulators saw their offering as "an investment of money, a common enterprise, with the expectation of profit, primarily from the efforts of others". Therefore, a security.

Another example of regulators discovering a security masquerading as a utility is the Munchee token sale. In December 2017, the SEC shut down Munchee's token sale after determining their utility token was actually a security.

Given the stringent approach regulators are taking, it's likely more prudent for a company looking at an ICO to issue security tokens under the current regulatory frameworks. By using offering memorandum, crowdfunding, and accredited investor prospectus exemptions, issuers will likely save time and costs, versus attempting to issue utility tokens. Regulators are comfortable with these prospectus exemptions, meaning fewer legal risks for issuers.

Utility tokens are rare.  Structure your offering as a security token or Simple Agreement for Future Token (SAFT) using prospectus exemptions to minimize regulatory concerns. Wondering what a SAFT is? Watch for our next post.

FrontFundr updates straight to your inbox!

We stringently screen all companies. We verify and review all investments.

We operate as an Exempt Market Dealer in the following provinces:

Please be aware, investments of this nature carry risks to your capital as well as potential returns. Please read our disclamer before deciding to invest. We also recommend to go to investright, a program of the British Columbia Securities Commission (BCSC).